Castelli traces its roots back to 1876 and a fine tailor, Vittore Gianni, in the heart of Milan. Through the years, Vittore Gianni clothed AC Milan, Juventus, and the Milan Ballet.

The first cycling clothing was made in the 1910s for the five-time Giro champion Alfredo Binda. Maurizio Castelli was born in 1948, and grew up following the races of Fausto Coppi, a close friend with Maurizio’s father who was then owner of Vittore Gianni.

Coppi always wore Vittore Gianni clothing, including the first silk skin suits designed for Fausto’s time trials. That famous photo of Coppi and Bartali sharing a water bottle while climbing the Col d’Izoard? Yep, both are wearing our jerseys.

Maurizio’s vision was to be at the forefront of technology, performance and design. Maurizio Castelli died in 1995 while cycling up the Cipressa climb, the next-to-last hill in the Milano-San Remo course.

Today, Castelli is dedicated to continuing Maurizio’s dream: to create the most innovative clothing for the cyclist seeking maximum performance.

Castelli made the Castelli Insider bibshort for their own indoor training. It had to be cool, comfortable, good wicking and with just enough padding. They’ve used the Inferno fabric that is a 80% polyester construction to help wick sweat away and avoid getting wetted out. Castelli put the light weight Giro Air elastic at the leg endings and the lighter KISS Air seat pad since they don’t want/need as much padding. Please note: keep in mind that the Castelli clothing fits smaller than normal. 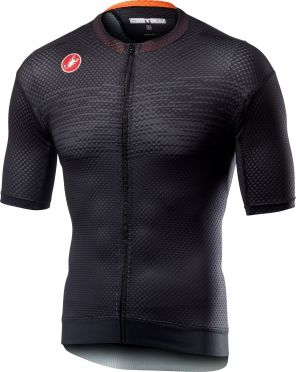 Castelli made this jersey for the rigors of indoor training. The 3D Mesh fabric allows maximum airflow for cooling while the 100% polyester content means it provides maximum moisture wicking. Castelli made it on the limit of not being too transparent in case you want to wear it for group training sessions, or if you’re using it at home and want to take it off after warming up the long zipper means it comes off easy. Please note: keep in mind that the Castelli clothing fits smaller than normal.